Unexpectedly getting some Cub time in France 2007

...or how I ended up flying with a Puffin from Lyon to Daventry.

We enjoy a trip to the south of France...with an interesting series of coincidences....

Our annual fly-out this year involved two Taylorcraft and a Cessna 150 intending to fly to Scandinavia and Estonia. The lovely European weather decided otherwise, with horrendous weather forecast for our departure say in lower Scandinavia. 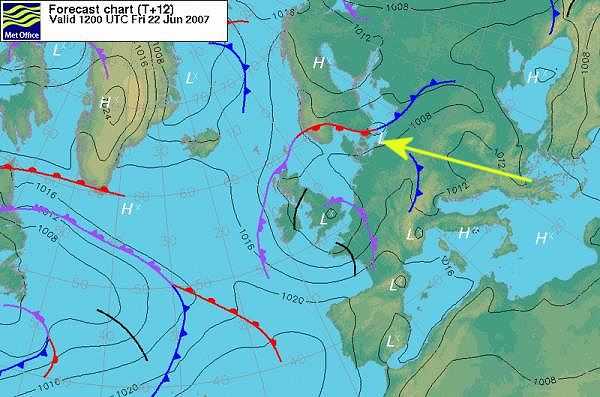 So we ended up aiming for Corona, Spain.

We crossed the English Channel from the Needles to Cherbourg (80 miles or so) in typical goldfish bowl conditions, so we used the airways-equipped 150 (yes, you read correctly) as the artificial horizon for the two lesser-equipped taildraggers. At times, we elected to fly low-level (250 feet) to maintain a horizon below low cloud. 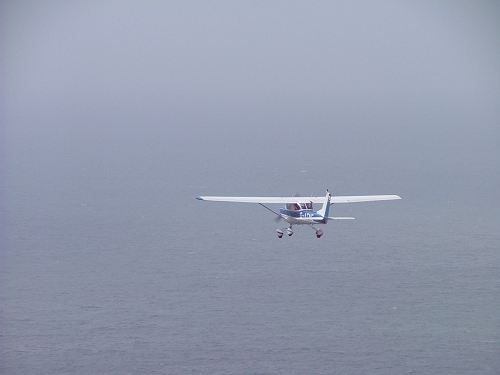 We cleared customs at Cherbourg, enjoying the lunchtime hospitality of Luc & Edith. 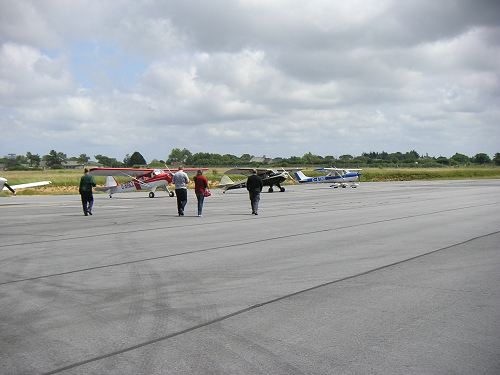 The trip along Utah & Omaha beaches was sobering. 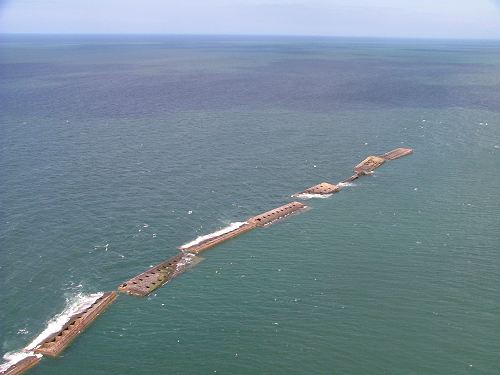 ( Above: Passing the Mulberry Harbour near Caen) 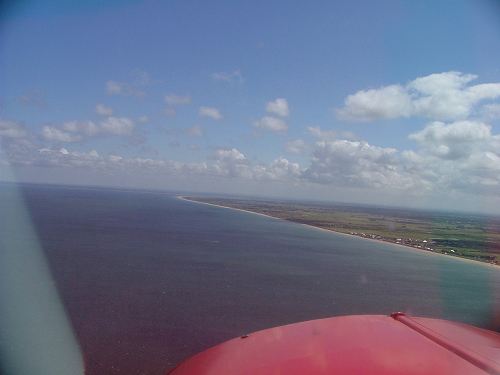 Heading inland & south, with refuelling stops at Alencon & Le Mans, we spent a night at Bergerac.

( Above: Formation departure at Bergerac)

Our Spanish plans turned into a ball of chalk in Bergerac, again due to the weather, so we headed east in France to Carcassonne, where we had a very pleasant few days.

Lots of little villages here from medieval days were constructed on top of hills for protection. 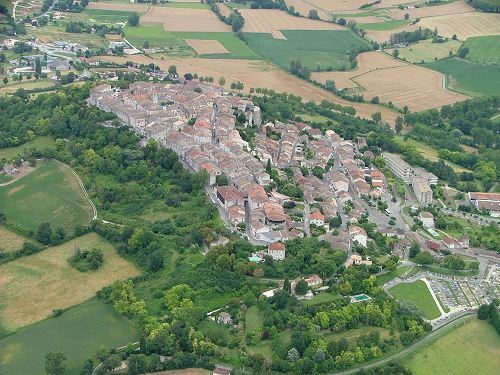 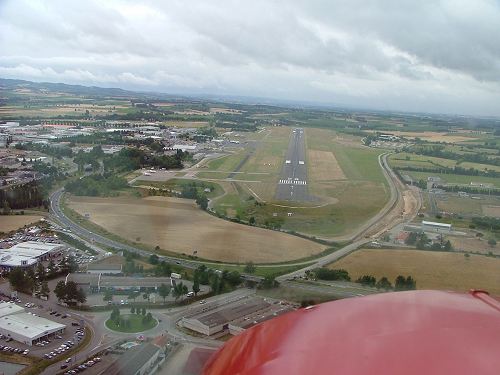 ( Above: Final at Carcassonne over the Citadel)

What a wonderful place, if a bit over-touristified. Getting fed up with the crowds at the Citadel, we spent a lazy few hours watching the goings-on at the Canal du Midi, including the rather clever wireless-operated locks. 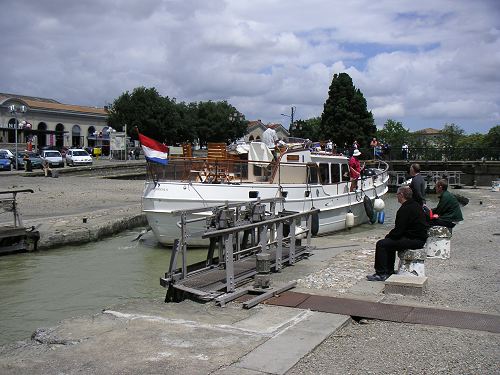 Heading further eastbound, we were again failed by the weather in attempting to reach the Millau bridge by a mere 8 miles, so we carried on to the Rhone valley, where warmer & sunnier climes were to be found. 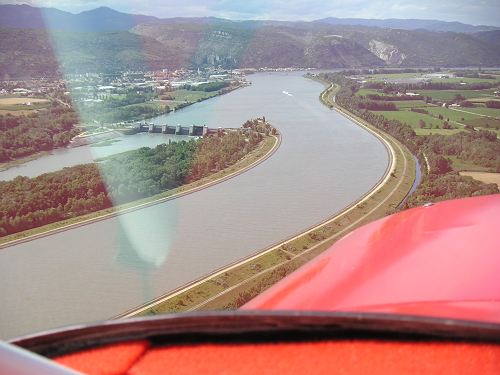 ( Above: A lot of the Rhone is a canal to form hydroelectric head) 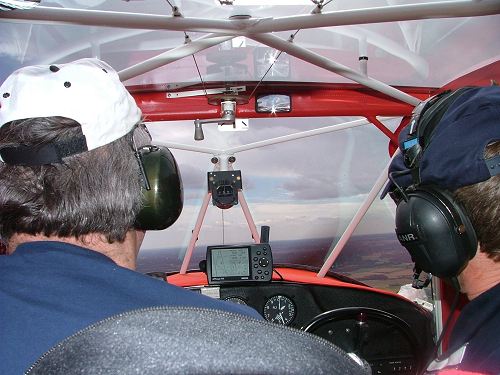 ( Above: Me & buddy John enjoy the sunshine, for once.) 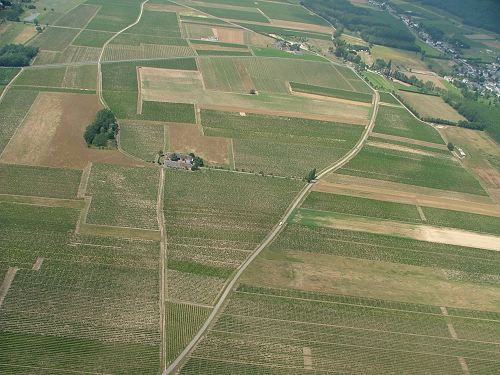 ( Above: Everywhere in the Rhone valley is geared up for grape production)

Landing at a small strip just south of Lyon, I call a friend who lives there to see if he is available to come out for a beer. He asks if we happen to have a spare pilot among us to ferry a Supercub back to England, one which got stuck there a few weeks beforehand due to weather.

I reluctantly agree (!) and after a few hours, we are all final for Villefranche to collect said Cub. 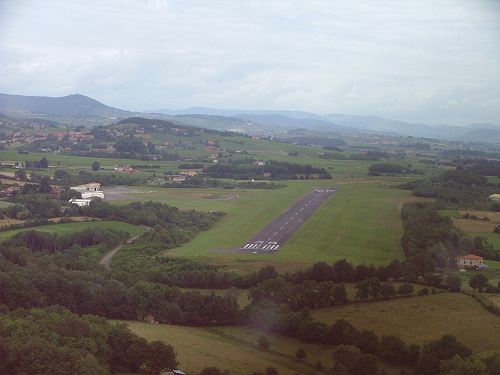 Of course, Adrian is on hand to provide breakfast coffee & croissants (thanks, Adrian!) and in short order, a three-ship becomes a four-ship. I get a rare opportunity to see both my Taylorcraft in the air at once. 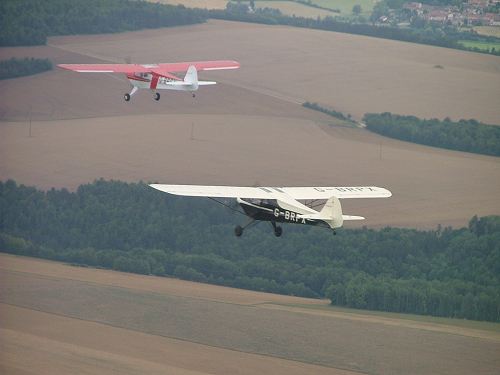 
After some 7 hours flying in one day (to beat the weather), we arrive home at Leicester... 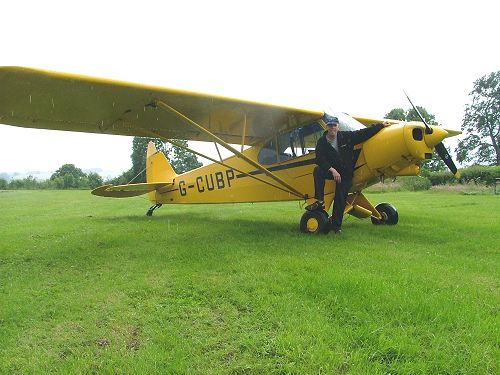 ...and I later deliver the Cub to a temporary home at a nearby strip at Daventry from where the owner can collect it at his leisure. 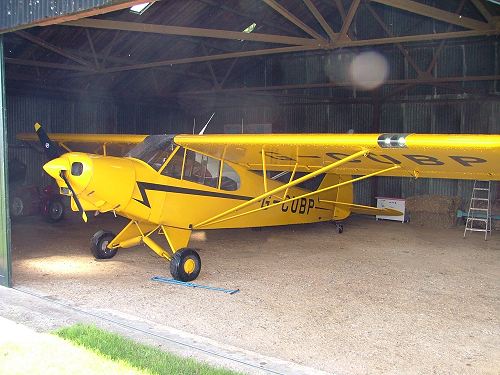 ( Above: Tucked up safe and sound with a Maule (which is hidden behind)) 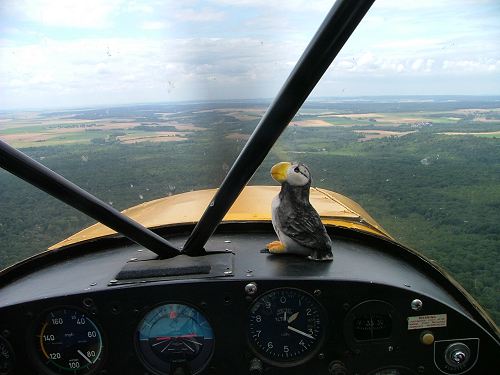 He was sitting on the coaming the whole trip, just making sure I did everything just right.